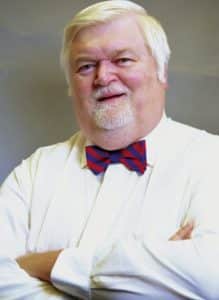 As many of you know Don Hinkle, founding editor of the Missouri Baptist Conventions “Pathway”, stepped into the presence of Jesus yesterday. Recently, he had planned to transition away from the Pathway at the end of the year, yet his transition came early and to a much better position. The day his transition was announced I had the opportunity to say “Thank you” for his years of service and express my excitement of his next venture.  If you knew Don you knew that he cared deeply about serving churches and consistently helped Baptist across the nation to to articulate a biblical worldview in all aspects of life.

Whenever we would visit would talk about everything from Jesus, politics, sports, bowties and the state of journalism amongst other things.  Under his leadership Missouri Baptist experienced many years of Kingdom service.  While I am sad to see him pass, I know he is in heaven reunited with his sweet Bernadette and walking the Streets of Gold!  Nevertheless, I have hope that I will see them both again in glory as we worship at the Throne of the Lamb, but for now we grieve, knowing that the Lord gives and the Lord takes away.

Thank you, Don Hinkle, for your friendship, leadership, love for the Kingdom of God
, and commitment to Southern Baptists.